Junior Galette, American football player and 2010 undrafted free agent signed with the New Orleans Saints, has been arrested on domestic violence charges, following an incident at his home. It would seem much like other professions measured by popularity and celebrity status, pro-football and domestic violence are par for the course. That is what main stream media would like you to believe. However pointing out the audacity of such a conclusion would only high light trivial excuses and thoughtless justifications, which seem to do more harm than good. 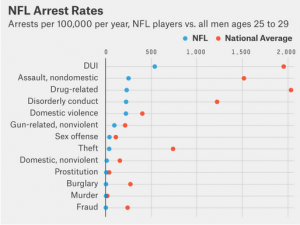 Yes, Galette for his involvement, should reap the punishment or redemption, of a final legal judgement, but then what. Social and main stream media outlets will breath life into this story. In the past the impact has been far reaching and without limits. The images used to portray domestic violence in professional sports are mostly black males. Don’t believe that statement, GOOGLE IT!

Research on criminal offenses related to NFL players specifically will show disparity in what main stream media outlets report and social media perpetuate. Data and data interpretation are tools to determine a course of action. According to the NFL Player Arrest Database, compiled by USA Today and cross referenced with BJS.GOV, DUI is the most common offense among NFL players.

This article was not meant to diminish the effects of domestic violence but to spot light how our society digest the negative images we are inundated with daily. Violence of any sort is wrong. For more information on DOMESTIC VIOLENCE or if you, a family member or friend are victims of domestic violence please contact The National Domestic Violence hotline. 1-800-799-SAFE(7233)