Andrew Joseph is speaking to anyone he can about the Florida State Fair, Student Day, policies, that he feels contributed to his son’s death.  Last year, Andrew Joseph III attended the Florida State Fair, on Student Day with friends.  The, St. Stephen Catholic School eighth-grader, was later struck by a car as he ran across Interstate 4 near U.S. 301, according to the Florida Highway Patrol, after being ejected from the fair grounds. The 14-year-old died at the scene.

The accident left many questions unanswered in the days after.  A grieving family wanted answers for their son, a straight A student, community helper through the school and athlete. “As his parents, he has given us some peace that we did an excellent job raising him, knowing the impact he had on so many lives,” Deanna Joseph said.

There are a number of new measures being proposed by Florida State Fair management.  Please take part in the discussion.  Your voice may save a life. 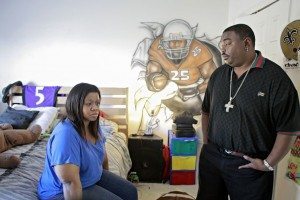