Famous Haitians The World Should Know About

The 2010 earthquake in Haiti claimed over 316,000 lives and more injured. This is also the same country where 1% of the population owns almost half of its total wealth. In fact, Haiti is the poorest country within the western hemisphere. Despite all this hardship, loss, and inequity, there is another more beautiful side of the country that is too often overlooked and that is Haiti’s people. The Haitian community has produced some notable leaders and this article will look at a few of them, including Dutty Boukman, Fernand Hibbert, and Dr. Bendson Louima. 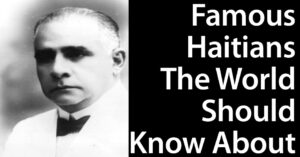 Widely known as one of the earliest leaders of the Haitian revolution, Dutty Boukman organized a fierce rebellion against the French. Boukman and fellow freedom fighters staged their resistance from a hill called BwaKayiman on August 14, 1791.
Boukman was known not only as a great freedom fighter but also for his massive body frame and warrior-like appearance which made him a notable figure in the resistance. He was also known for his fearsome temper which played a huge role in helping him establish control during the rebellion against the French.
The Haitian Revolution was the largest such rebellion in the Western Hemisphere. It was also one of the most successful rebellions in history. In his lifetime, Boukman was enslaved twice, first in Jamaica and then later in Haiti. The revolutionary leader died on November 7, 1791 in Haiti as a free man.

Fernand Hibbert was born on October 3, 1873 in Miragoane, Haiti. Later on, he studied law and political science in Paris, France. He would later become an accomplished novelist writing many remarkable works. Most of Hibbert’s literary works are characterized by satire and humor. He died on December 19, 1928 in Port-au-Prince, Haiti.

Dr. Bendson Louima was born on February 5, 1979 in Port-de-Paix, a small town in Haiti. He took his advanced studies in the Université Notre Dame d&#39;Haïti where he practiced medicine. Louima pursued internships in different hospitals to broaden his experience. One of those hospitals was Cap-Haïtien. Louima was also notable medical professional in the Haitian rural community of Caracol. He is credited as the founder of a cholera treatment organization called Médecins Sans Frontières (Medicine Without Borders) Suisse Cap-Haïtien.

On top of that, Louima is also involved with Emedex International, where he serves as a
member of the Advisory Board. Emedex International focuses on the best ways to promote
emergency healthcare around the world and it seeks to transform and make it sustainable.
These three examples are only a few of the many notable leaders Haiti boasts. Haitians