The first court award in a vaccine-autism claim has been confirmed and it’s huge at over $1.5 million dollars! The family of Hannah Poling will be receiving the money for life care, loss of earnings and pain and suffering AND this is just for the first year. The total payout could amount to over $20 million.

Hannah was described as normal, happy and precocious in her first 18 months.

Then, in July 2000, she was vaccinated against nine diseases in one doctor’s visit: measles, mumps, rubella, polio, varicella, diphtheria, pertussis, tetanus, and Haemophilus influenzae.

Afterward, her health declined rapidly. She developed high fevers, stopped eating, didn’t respond when spoken to, began showing signs of autism, and began having screaming fits. In 2002, Hannah’s parents filed an autism claim in federal vaccine court. Five years later, the government settled the case before trial and had it sealed. It’s taken more than two years for both sides to agree on how much Hannah will be compensated for her injuries. 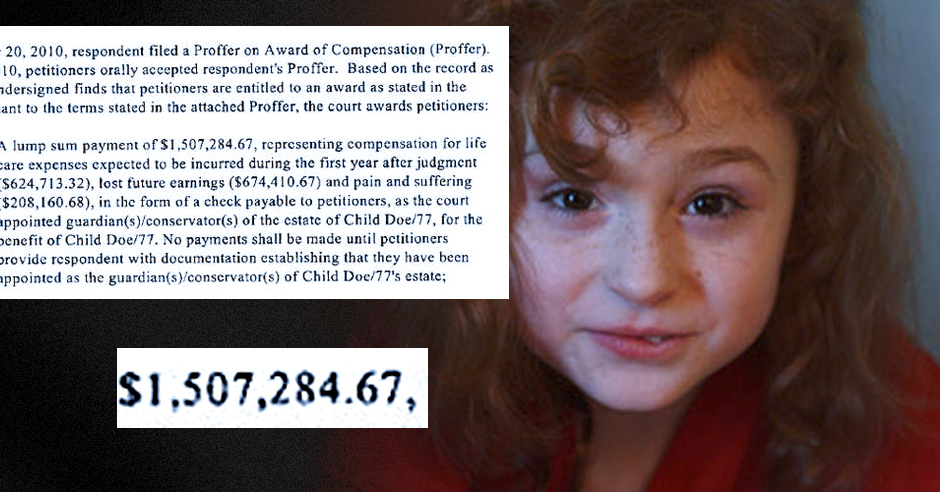 In acknowledging Hannah’s injuries, the government said vaccines aggravated an unknown mitochondrial disorder Hannah had which didn’t “cause” her autism, but “resulted” in it. It’s unknown how many other children have similar undiagnosed mitochondrial disorder. All other autism “test cases” have been defeated at trial. Approximately 4,800 are awaiting disposition in federal vaccine court.

I guess the take away from this is that in some cases vaccines can definitely cause problems and more knowledge and prior testing is needed before stabbing all children. I’m personally not an anti-vaxer but I do believe more work and research needs to be done.

What are your thoughts?