Dred Scott was born enslaved in 1799 in Southampton County, Virginia. His owner, Peter Blow, moved with his family, Scott and other enslaved people to Alabama, then St. Louis, Missouri and later sold Scott to Dr. John Emerson. Dr. Emerson moved frequently and took Scott with him to different states including Illinois, Fort Snelling (now the State of Minnesota) and Wisconsin. Later Dred Scott married Harriet Robinson and returned to Missouri with Emerson and both families. 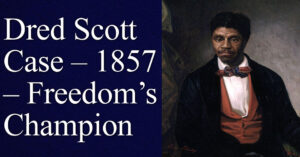 Dred Scott tried to purchase freedom for himself and his family, to no avail. Later, he and his wife filed subsequent freedom suits. In 1850, a lower court (St. Louis Circuit Court) ruled in Scott’s favor only for Missouri’s Supreme Court to overturn its decision two years later. Scott of course appealed.

In the Dred Scott case, dubbed Dred Scott v. Sandford, Scott argued, since he and his previous owner lived in the territory of Wisconsin and the state of Illinois, he was entitled to freedom since slavery was illegal in those places. According to laws in Wisconsin and Illinois, slaves were manumitted if they stayed in the non-slave states for an extended period.

However, on March 6, 1857, the US Supreme Court decision denied Scott his freedom. It also stated that African-Americans were not entitled to USA’s citizenship status and invalidated the Missouri Compromise (1820) which declared some territories free. This inflamed regional tensions which culminated into the American Civil War four years later.

In 1865, the Dred Scott decision was effectively overturned because the 13th Amendment abolished slavery, and the 14th Amendment in 1868 guaranteed citizenship rights to African-Americans.

• Constitutional scholars regard the Supreme Court’s decision as one of the worst legal decisions ever, citing it as an egregious example of imposing judicial solutions to political problems.
• The northern states supported the Republicans who at that time opposed the institution of slavery, leading to fears in the south, and this sparked the momentum for Civil War and calls for secession.
• The Dred Scott case was the basis for elections outcome and the focal point of the presidential debates in 1858. The Republican Party became a national force and eventually, Abraham Lincoln became the president and ensured emancipation.
• Scott and his family gained their freedom through a private arrangement. Sadly, Scott died a year later, in 1858.
• Presently, the Dred Scott case is referred to whenever politicians want to compare bad Supreme Court’s decisions to a similar historical precedent; for example, the 2010’s Citizens United v. FEC.
• When then Chief Justice, Roger B. Taney, died in 1864, the Republicans blocked a request to include his bust in a hall that recognized chief justices. When he died, he was roundly vilified in the North.
• Although Chief Justice Taney hoped his decision would settle slavery and congressional authority issues, it only served to increase tensions between the abolitionists and the pro-slavery factions.
• Abolitionists supported the Dred Scott case; for example, Peter Blow’s children: Henry Taylor, Charlotte Taylor, and Martha Ella financed the freedom suits until the Missouri Supreme Court decision.
• Once a newspaper covered the court ruling and the precedent legal tussle, slavery in non-slave states was brought to light.