DISGUSTING: Michigan Fights An Order To Deliver Water To Flint Residents Saying It’s Too Much!

The Flint water crisis is not over and for over two years now many residents have not had clean or safe water to drink.

Now the State are complaining that an order to deliver water to those affected residents is asking too much!

The state are fighting the judge’s order which asked that they deliver water to those residents who do not have safe water. Last week the order laid down by U.S. District Judge David Lawson said that four cases of water need to be delivered to every resident that needs it.

“The herculean effort required by the court order would be on the magnitude of a large-scale military operation,” Anna Heaton, spokeswoman for Gov. Rick Snyder (R), wrote in a statement emailed to The Huffington Post. “The resources to accomplish this would only be available through the activation of the National Guard or the hiring of several logistics companies.” 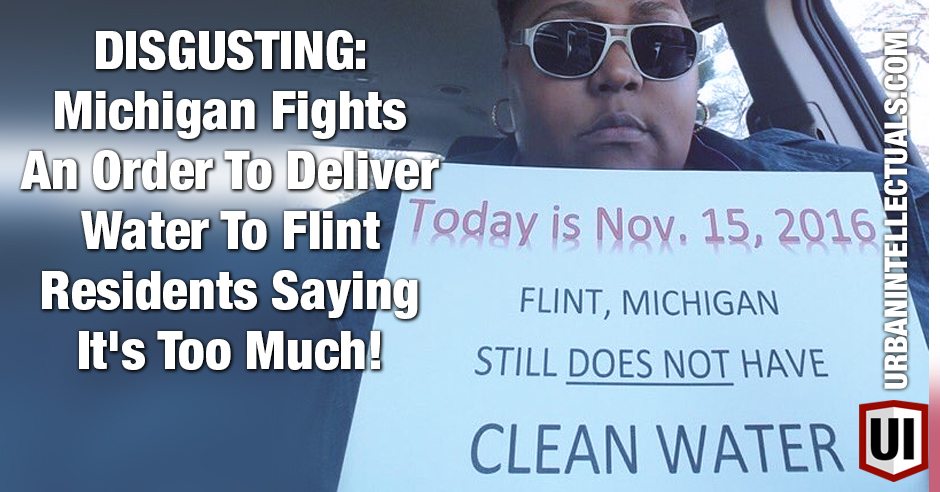 The claim it would cost $10.5 million per month and that the money taken away from Flint water funds could defund other important efforts such as nutritional assistance programs for kids.

astor Allen Overton with the Concerned Pastors for Social Action said in a statement.

“It’s sad that the State of Michigan continues to disenfranchise the community of Flint,”

“What happened to Governor Snyder’s pledge that he would work to fix Flint’s drinking water crisis? This action today inflicts more harm on a city that’s already hurting,”

Seriously, the State needs to find that money and serve every damn resident that needs it!

the media doesn’t cover it anymore and the govt might not care but flint still does NOT have clean water. it’s been YEARS. #FlintWaterCrisis pic.twitter.com/a1lUlhXI1e

Read more in the Huff here.