Did You Know This Is The Only Black Man To Build, Own, & Operate a Golf Course in the United States?

The life and times of Bill Powell are interesting to say the least. Full of pride, resolve, determination and hard work. We love those full of these qualities. He left quite a legacy if we would only share it.

Powell was born Nov. 22, 1916 in in Greenville, Alabama. At the age of 9, he became a golf caddy and fell in love with the sport of golf. It was this love for golf, mixed with his rugged determination that lead him to do the things he did during his life. 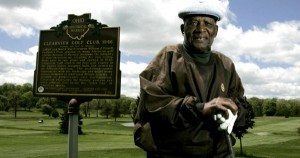 Like most men during his era, Powell served the United States in the military, the Air Force to be specific. After he returned from England in 1946, he settled in Canton, Ohio. His love for the game of golf survived his military duty and he set out to play.

However, this was 1946, a year before Jackie Robinson broke the baseball color barrier, and white people were not allowing blacks to play on their public courses.

[ADSENSE2]“It’s distasteful when you get turned down,” he told The New York Times in 2009. “You have a little pride. You say the hell with them. You say I’m not going to badger. I’m not going to beg them. So I said I’ll just build a golf course.”

Powell faced similar rejection when he tried to get a bank loan to build his own course, but still didn’t allow the racist country and people hold back his dream of playing and teaching golf to everyone that dreams of playing the sport.

Powell, two black doctors and a loan from his brother purchased 78 acres on a dairy farm in East Canton. It was there, Powell built the only black owned, operated and and controlled golf course in the United States, according to the PGA.

In April 1948, the dream came true and Powell opened Clearview Golf Club. It had 9 holes at the time, but was opened to any and all who desired to attend. Primarily, the local black children and adults got the opportunity to play on Powell’s wonderful course, a prime motivation for it’s construction.

When asked why did he build Clearview Golf Course:

“I did not want other people who wanted to play the game of golf to have to suffer the indignities that I had,” he said.

Powell died on December 31st, 2009, but left a legacy for us all to be proud of and build upon.