Did You Know Durham, North Carolina Had It’s Own Black Wall Street?

“It was unique in Durham because you had this concentration of black executives and professional people who were doing the same things as whites in their communities,” says Garrett, a retired Duke trustee and chairman of theParrish Street Advocacy Group (PSAG). 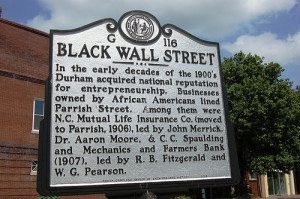 As early as 1910, Booker T. Washington and W.E.B. Dubois both visited Durham and hailed it as a national model for the black middle class. From the 1890s until the 1960s, Parrish Street was the home of the North Carolina Mutual Life Insurance, the nation’s oldest and largest black-owned insurance company. (The company moved to Chapel Hill Street in 1966.)

Parrish Street was also home to two banks, the Mechanics and Farmers and the Mutual Community Savings, which offered home mortgages and small business loans to Durham’s African Americans.

Now, Garrett and others want to use the history of Black Wall Street as a model for revitalizing Durham’s downtown and establishing a “museum without walls” on Parrish Street.

“We want to tell that story,” he says. “We want to invite visitors to learn about the history and see a redeveloped downtown area.”

Duke and North Carolina Central University (NCCU) students will help tell that story this semester in a Center for Documentary Studies (CDS) fieldwork course offered jointly by both universities. Students will learn documentary techniques and, through field trips and interviews, experience the history of Black Wall Street.

“This is a way to bring students off campus, to help them understand more about Durham’s rich history,” says Barbara Lau, a CDS folklorist and instructor for the course, co-taught by NCCU mass communications instructor (and Duke graduate) Brett Chambers.

With students from each university and weekly meetings alternating between the campuses, the instructors also hope to promote cross-campus communication. It’s one of two CDS courses bringing together Duke students with those from NCCU and the community. The second is “The South in Black and White,” which is being taught at the Hayti Heritage Center and is open to students from Duke, NCCU, the University of North Carolina and members of the public.

Lau serves on the PSAG’s History Committee and has invited other group members to address the class. These include Garrett, the first African American certified public accountant to practice in North Carolina; and Carl Webb, another Durham native whose company, Greenfire Development, has recently purchased several historic properties in and around downtown.

“It was invigorating because [the students] come to the discussion with different questions, different perspectives,” Gordon says. His office of Economic and Employment Development has worked with PSAG on the new plan for downtown.

The 2005 class provided opportunities for students to conduct original research. Megan Moskop, now a Duke junior, started her course project by interviewing female employees of the Mechanics and Farmers Bank. She then received a summer grant to continue the study to include businesswomen such as Viola Turner, a secretary who rose through the ranks of N.C. Mutual to become the first woman on its executive board.

“A lot of research has been done about the men who were instrumental in making Parrish Street the Black Wall Street,” Moskop says. But women were powerful players as well, and Moskop plans to turn her interviews into an audio documentary. She would also like to see a reunion of the surviving female employees from all Parrish Street companies, as well as a memorial.

For another student, Neil Williams (Duke ’06), the research carried his post-graduation career in a new direction. He and a classmate produced a short video about R. Kelly Bryant, a retired officer of N.C. Mutual.

At the time, Williams was a business major with his eye on a film career â in Hollywood. Taking the class piqued his interest in documentary work.

“The more I learned in Professor Lau’s class, the more I realized, Durham’s a unique place to tell the story of black entrepreneurship,” says the 22-year-old Williams, now an independent film producer in Durham. He’s currently working on a full-length documentary, “The Silver Rights Movement.”

“I’m trying to use that history of the Black Wall Street and black entrepreneurship to start looking at some of the national issues that are affecting African Americans,” Williams says.

Students say the class has changed them as much as it has changed their view of Durham. “Doing this project has made me more excited to be a part of Durham,” Moskop says. “Durham has its own identity and that gets forgotten by a lot of [Duke] students. This helped me learn more about that identity.”

“It’s about getting beyond the surface,” Lau says. “We begin to chip away at the misconceptions and stereotypes about Durham and what it means to live here.”

We use information collected through cookies and similar technologies to improve your experience on our site, analyze how you use it, and for marketing purposes.
Did You Know Durham, North Carolina Had It’s Own Black Wall Street?