For some reason, many in the black community use to refer to Bill Clinton as the first black President of the United States. We think it is because Bill played the saxaphone, admitted to smoking weed and appeared on the Arsenio Hall show back in the day.

Nevertheless, Clinton has a checkered past when it comes to the black community we must not be aware of these days. In fact, he has  recently come out and tried to apologize for some of it admitting the federal sentencing laws he enacted into law made the legal problem worse for the black community. 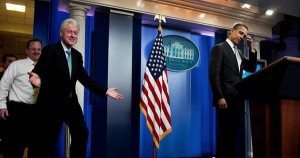 This admission over 15 years later raises a side eye in the black community because we already knew this, but it seems he is only doing this now because his wife has a good shot at winning the Democratic nomination for President in 2016 and she will need the black vote.

Well, Bill Clinton has some more apologizing and begging to do for the racial remarks he has made in the past when it comes to current POTUS Barrack Obama.

In 2008, Clinton is reported to have said (about candidate Obama), “A few years ago, this guy would have been carrying our bags”.

In 2008, Clinton is reported to have said (about candidate Obama), “A few years ago, this guy would have been carrying our bags”.

The racially insensitive comment was made to Senator Ted Kennedy as Clinton tried to get Kennedy not to endorse Obama, but instead back his wife for President, according to The New Yorker.

The reported comment was similar to the one attributed to Mr Clinton in a 2010 book.

“A few years ago, this guy would have been getting us coffee,” Mr Clinton was quoted as saying in Game Change, by John Heilemann and Mark Halperin.

Mr Clinton has, for example, on earlier occasions called Mr Obama “incompetent” and “an amateur” who has no clue about how the world operates, according to an article in Sunday’s Post by Edward Klein, author of The Amateur: Barack Obama in the White House.

“He doesn’t know how the world works,” Mr Clinton had said. Mr Klein said Mr Clinton had convened a meeting at his Chappaqua, Westchester, home to urge his wife to challenge Mr Obama for the 2012 nomination.

SOUND OFF: What do you think of Bill Clinton’s racial comments?