Did You Know a Black Woman Is Behind a $150 Million Dollar Per Year Construction Firm?

Most people don’t think of black women and the construction business, but that didn’t stop this powerful woman from building her dreams. She powers one of Texas most successful businesses and doing it in a male dominated field.

Gail Warrior is the founded and CEO of Warrior Group, a construction management business she began in 1997 with guts and a dedicated work ethic. Starting out as a Dallas based company, Gail focused on the Warrior Group’s brand, reputation and obviously pleasing their clients. 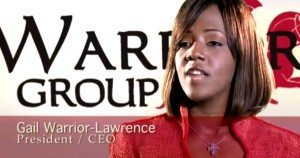 Eventually Gail contracted a healthly share of a $40 million dollar contract with the Army. The contract called for modular Army barracks for Fort Bliss in El Paso, Texas.

The expansion was on. You don’t turn down a contract and opportunity like this is have the ambition and drive of this woman

The expansion was on. You don’t turn down a contract and opportunity like this is have the ambition and drive of this woman. However, Gail and her team didn’t just take the Army contract and run. They began to focus on Permanent Modular Construction and become one of the country’s leading experts in the field.

Today, the Warrior Group generates over $150 million dollars in annual revenues and is one of the country’s largest woman/minority owned general contractors.

The Warrior Group has gone on to build large projects for the U.S. Army at several bases including Fort Belvoir, Fort Bliss, Fort Carson, Fort Hood and Fort Sam Houston. The company has also built in the K-12, healthcare and higher education markets.

Gail Warrior is a graduate of Clark Atlanta University. She has a B.A. in accounting and earned an M.B.A. from the University of Dallas.