Have you ever heard of Seneca Village? Well, if you have been to Central Park in New York City you’ve probably walked over the old site of the place that was once a bustling community and some say the first prominent area of African American land owners in Manhattan.

But the village was destroyed to make way for the grand park that we know and love today.

The mid 19th century saw reports about green spaces in the UK spreading to the USA and leaving NYC officials deciding that Manhattan needed a big park area, the issue however was that the land for this was not free.

So, they drafted up a plan and decided to use a big chunk of space the now 59th and 106th streets. This area was home to industry and a growing immigrant population.

Seneca Village was 2/3 black and 1/3 Irish with 50% of people owning their property. The 264 residents were moved off using the the law of eminent domain, which allows the government can take private land for public purposes.

Now while this isn’t officially registered as theft, forcing people to move and offering less than they deserve / want for the land they own is theft in my opinion!

Despite court room protests against the orders and the compensation amount the plans went ahead and the villagers displaced!

Media certainly didn’t help as they rallied against the residents calling them “squatters” and the place was also described as a “n***er village”.

The village in some ways was a bit of a safe haven after the end of slavery and the need for blacks to stay in small communities, sadly after the village was broken up people were thought to have scattered.

You can read more about the village and recent efforts to restore this history here: http://bit.ly/1IsUH0h 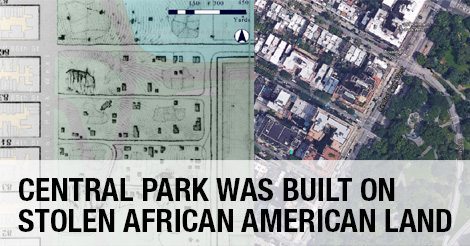