California Rapper, No Criminal Record Faces Life Sentence In Prison for His Album

When this story first broke, we thought it was a hoax or some satire site running their games. Turns out this is a real case in the State of California and we are STUNNED, like the rest of the country.

Brandon Duncan, aka Tiny Doo, lyrics cover the subjects most rap music cover these days, gangs, money, sex, and violence. Featuring duets with starts like Lil’ Wayne, he has a decent following in his area and looking to build upon that in the future. With songs on his album like “No Safety”, his content is what you would expect out of the typical, modern day rapper. 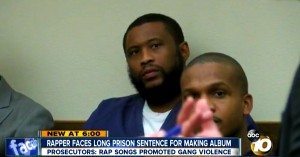 However, Duncan was charged with attempted murder charges in court along with 14 other people. The charges are gang conspiracy in the murder of 9 people since April 2013.

As bizarre as it seems, the prosecutors are using a little known state law that was voted into effect in 2000 by the general public. The law states gang members can be prosecuted if they benefit from crimes committed by other gang members.

Keep in mind, Duncan hasn’t been charged with any crimes before, nor directly involved in any of the killings, the prosecutors argue he has benefited from the murders allowing him to sell more albums.

No matter what we think about Duncan’s music or the culture he lives in, to be charged with murder and be up for a life sentence in prison seems ridiculous. We wonder of Martin Scoresese or Bratt Pitt will be sentenced to life in prison for making violent movies that obviously benefit from the violence, drugs and crime?

Other articles you may Love

Doubt it, but what do you think?

Is this a good law that will curb the rap music industry, cleaning up the content and hopefully not influencing young people to commit senseless crime? Or are prosecutors going too far trampling on 1st Amendment rights of the people?