A Bulletproof Black Man In A Hoodie, Marvel’s Politicized Luke Cage Is Exactly What We Need NOW

Pop culture always reflects the world and what’s going on but often writers and mainstream artists are careful of hitting certain topics. However Marvel seem to be facing things head on.

Every young black man fears for his life walking the streets of America. It’s not exaggerated, it’s just reality. Being bulletproof would seriously make life easier.

In the new show Luke Cage, we see this realised. Luke is very much a black man, wearing an iconic hoodie, nodding to slain Trayvon, and literally walking into bullets.

Luke is the hero we need right now. 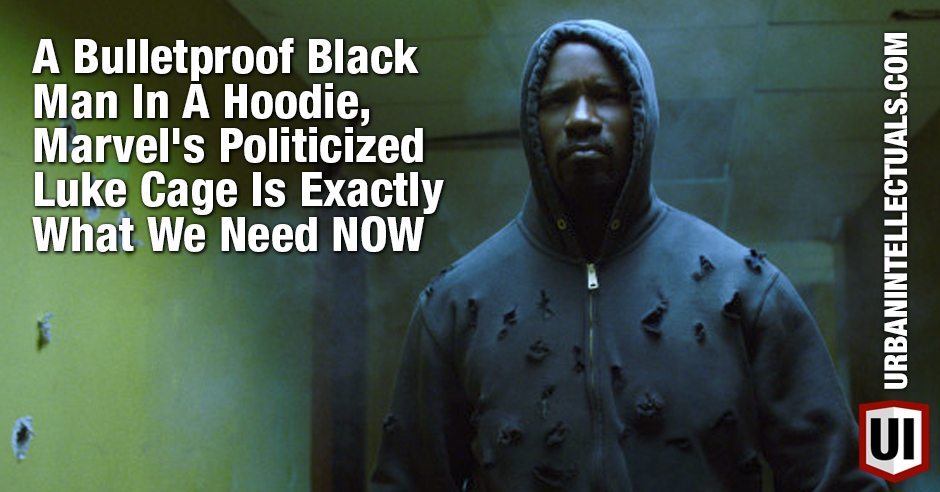 Mike Colter, the man who plays Luke, said himself “I can’t imagine anything a black man would want to be more right now than bulletproof.”

He has given a lot of insight about the new show and the political stand that the creators at Marvel are taking.

Talking of influences he said that

“It’s a nod to Trayvon, no question,” and that, “Trayvon Martin and people like him. People like Jordan Davis, a kid who was shot because of the perception that he was a danger. When you’re a black man in a hoodie all of a sudden you’re a criminal.”

“That’s something we shouldn’t have to deal with, but we do. It’s a double standard. We can’t cover our head when it’s cold and raining because God forbid someone sees us and puts our life in danger. We wanted to pay homage to that — it’s not something we were shying away from.”

Talking about it being shot over a year ago he said;

“When we were filming this, there were different things going on,… Eric Garner, the policemen were acquitted. No one was brought to justice. There was no handing out of any sentence. There are a couple other things that happened during the time we were filming. We were watching the news and it was always someone being shot who was unarmed, and there is no justification for it. It’s mind-boggling.”

“The writers aren’t immune to the society that they live in, they are acutely aware and I’m sure it helped inspire them,… The show isn’t just Black Lives Matter, that’s not what the whole show is about. That being said, it will strike a chord with some people because you can’t help not think about it. The people who are watching will tell us what having a bulletproof black man means to them.”

“This has always been going on, the only difference is that now we have camera phones. People are just more aware of it,” Colter says. “I don’t think Luke Cage as a superhero is something that has changed dramatically from the ’70s to now. He’s a black man going through the same thing as other people of colour, it’s just that he has superpowers.”

I can’t wait to see it! Kudos to the writers.