#BlackGirlMagic: At 22-Years Old, She Is Already a NASA Engineer

With the release of the movie Hidden Figures there’s been a renewed interest in math and scientific fields among black youth, especially black women.

I can’t even begin to talk about how many times I’ve heard the young black women around me talk about how inspired they are by the portrayals of Katherine G. Johnson, Dorothy Vaughan and Mary Jackson.

Many of them have even said they wish they were better in math so they can follow in their footsteps. Well, I’ve heard enough talking. Let’s celebrate a young woman that’s doing it! 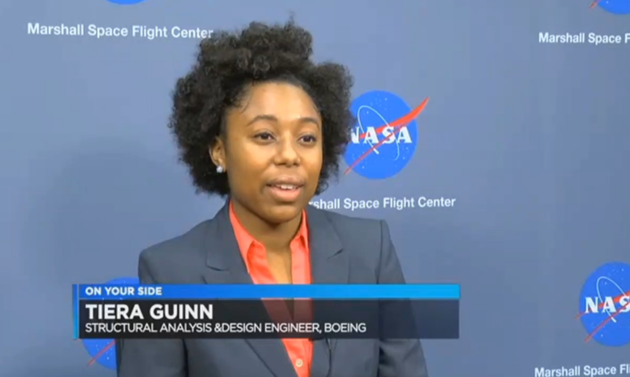 Meet 22-Year Old Engineer Tierra Guinn. This beautiful young lady is a Rocket Structural Design and Analysis Engineer for aerospace company Boeing, who is working with NASA to create a space launch system.

The space launch system, as posted on NASA’s website, is “an advanced launch vehicle for a new era of exploration beyond Earth’s orbit into deep space”. The SLS will be the planet’s most powerful rocket and Tierra plays a huge part in it’s creation, designing and analyzing parts of the rocket.

Tierra isn’t new to this! She’s had a passion for engineering her whole life. She told Fox affiliate WBRC, “One day I saw a plane fly by and I just had this realization, ‘huh, I can design planes. I’m going to be an aerospace engineer.” According to Tierra, her passion for math came from her mom.

“When [my mom and I] would go to the grocery store, she would get me to clip coupons [and] put it in my coupon organizer. By the time we got to the register, I’d have to calculate the exact total, including tax. And I did that since I was six years old.”

Tierra is a student at Massachusetts Institute of Technology (MIT) that will be graduating with a 5.0. Let’s use her story to show that we have dynamic youth in this generation and that you can’t put a ceiling or age limit on success!

Check out my exclusive interview with Actor Jake Allyn who plays BoJohn Folsolm on BET’s new show about HBCU Life The Quad!