It seems the cops in this country even harass and question you when you save one of our kids from the hands of a sexual predator!

Moise Morancy, a hip hop artist, actor and activist… oh, and a black man, was riding the Q53 bus in Queens when he witnessed a man inappropriately touching a young girl next to him.

“So I saw him creeping on the inside of her leg,”

“I said if you touch her, you’re going to have a problem with me.” 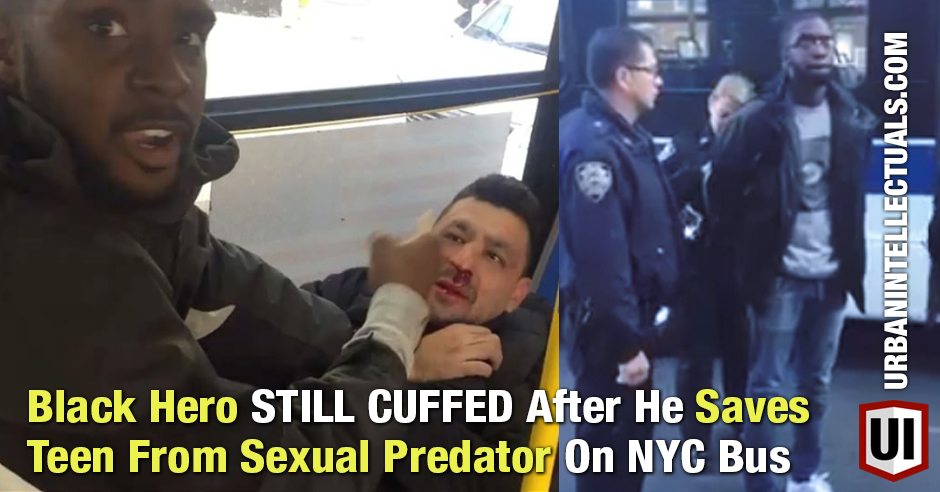 He tried to yell at the guy who was touching the leg of the 15-year-old. No one helped at first, then another passenger started filming the incident.

As the video shows, police arrived, they then decided it was appropriate to put both the suspect and Morancy in cuffs, despite plenty of witnesses being able to tell them what happened.

He was eventually released when a black sergeant arrived and thanked him for helping arrest the alleged sexual predator. 36-year-old Pablo Levano is now charged with forcible touching, thanks to Morancy and Morancy alone!

The video can be seen below.

Morancy said regarding the sergeant, “He said ‘you’re a hero’ and shook my hand and said I was you 20 years ago and that touched me.”

Morancy said the teen gave him a rose for his help, the sergeant proclaimed him a rose from a concrete jungle and the video has gone viral, highlighting that we all need to take responsibility for these things.

“And I urge other men to step in to intervene when someone’s being sexually assaulted. It’s disgusting!”

Morancy deserves some good turns in life for his actions. So a little free promo, his mixtape coming out soon called “Chronicles of a Ghetto Rose.” will be coming soon and you can follow him on facebook here.