Harlem World – LiveSteez research shows that Black churches, in aggregate, have collected more than $420 billion in tithes and donations since 1980. With a Senate investigation into the finances of several mega churches underway, the “Prosperity Movement” has been the target of mounting criticism from inside and outside the Black Church. Specifically, the affluent ministries of The Reverend Creflo Dollar, Bishop Eddie Long and others have drawn the attention – and ire – of some clergy and laypeople alike. 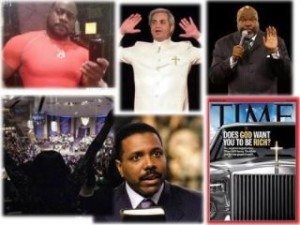 One church, the Reverend Dollar’s World Changers, reported $69 million in 2006 income, according to the Atlanta Journal Constitution.

Mainstream politicians and Black community leaders are demanding a better accounting of the “return on investment” offered by churches to the communities that fund them. Meanwhile, legions of faithful churchgoers defend their pastors and accuse their detractors of applying a double standard that ignores the largesse of wealthy, white televangelists, while underplaying the economic development and social service functions provided by the Black Church.

“The church has gotten caught up in materialism and greed, a lifestyle. Many ministers today want to live like celebrities and they want to be treated like celebrities. In other words, instead of the church standing with the community, the church has become self-serving. It has strayed away from its mission” according to Dr.Love Henry Whelchel, professor of church history at The Interdenominational Theological Center in Atlanta.

Few people – not even the ongoing Congressional investigation by Senator Chuck Grassleyaccuse the mega church pastors of outright larceny, and congregants generally approve of their pastors’ luxurious lifestyles. However, in a blatant recent example, a father-son pastor team, 76-year-old Richard Cunningham of Moreno Valley and his son, 52-year-old Philip Cunningham of Laurinburg, N.C., pleaded guilty to felony grand theft and fraud charges. The younger Cunningham also pleaded guilty to forgery. Over five years, prosecutors say, the Cunninghams stole from Calvary Baptist Yorba Linda Church and School bank accounts and used the money to buy time shares in Hawaii and Palm Springs, golf club memberships and a Cadillac. Prosecutors say the men have paid $3.1 million in restitution to the church.

LiveSteez’s investigative series will take a forensic editorial approach to quantifying the return to Black America for the $350 billion in tax-favored donations it has given to the Black Church, examining the arguments on both sides of the pulpit. In this series we will seek answers and advisory to the following questions:

– How often and how much do church leaders take advantage of the faith of poor black people?

-We will investigate and indentify the churches they are showing a strong return on investment that goes beyond inspiration.

– What does the black community have to show for the $350 billion in tax free dollars?

– Expert analysis on what could potentially be done with such a huge amount of money and how it could improve the state of our communities.

– Why do some church leaders refuse to participate in the Grassley congressional Investigation, which requested the financial records of several mega-churches.