President Obama just shocked the nation a few minutes ago while flying on Air Force One. He announced his proposal to make the first two years of community college free for anyone willing to work for it.

The President just finished up a trip to Detroit, Michigan speaking with the auto workers, legislators and people of the great state, but didn’t want to waste any time building momentum and excitement for his new idea. 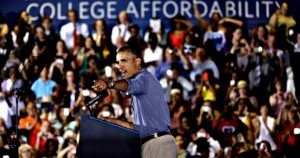 While flying to Phoenix, he released a video aboard Air Force one announcing his proposal of making the first two years of community college completely free. He said there was no reason to wait for the State of Union Address to announce it, so now was the time.

The 1:46 video was released on the official White House fan page and has the country buzzed with excitement.

POTUS talked about the key to the future being education of our young people and wanting to make sure community college is accessible to everyone willing to work for it.

It is unclear what he means by “willing to work for it”, but people are excited to learn more.

We will follow up with more of the details, but be sure to check out the video and pass it along.