As more accusations of police brutality and excessive force rear its ugly head, communities are left desperate for answers.  Who is next?  Where do you go from here?  How can we effect real change where we have failed in the past?

In the wake, Law Enforcement agencies nationwide are being put to the test.  None more then the Dallas Police Department where five officers where killed policing a peaceful protest organized by the BLACK LIVES MATTER movement.

For police agencies the answer is simple.  “We’re hiring.”  The exact words uttered by Dallas Police Chief David Brown in a press conference this week.  Police Chief Brown’s sentiments have seemed to resonate with other law enforcement organizations who are making the decision to ramp up minority recruitment in the communities they police.

For the community the reality begins to unfold. No law enforcement agency nationwide is asking for change. They don’t see anything wrong with their hiring practices or standards. They don’t see anything wrong with their system of promotion or police tactics based on the public and political mandate for “THE WAR ON CRIME”. They have collectively overlooked or turned a blind eye for officers who choose to speak out about departmental misconduct and are suspended, fired or experience peer retribution.

So if you don’t like they job we are doing, then you try it . . . is a backhanded recruitment method only to prove we are justified in all uses of force. Will communities feel any safer with more entry level positions being filled in our Law Enforcement Agencies? This is the same system that produced 518 deadly force fatalities in 2016 on pace with 990 deadly force fatalities of 2015, according to The Washington Post’s Fatal Force report.

Behind the weary words and petition of a public servant, we the community realize it is not a call for understanding or change.  Based on historical data kept on police budgets and spending, it is an unofficial request for increased dollars and upon further introspection, by ones own active duty personnel adding more bodies to a system which deplores whistle blowers may give some relief to those suffering within the system now. 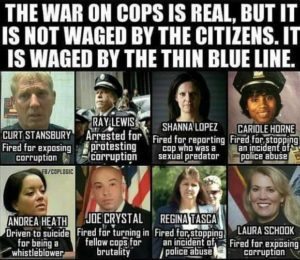 The real point being made here is police agencies across the nation can not do it alone.  They are not equipped to address community needs and follow the mandates set by politicians and their wealthiest constituents. We have to ask the tough questions. How much are we investing in crime prevention programs, mental health awareness and best possible practices when policing individuals with mental health concerns? Are we addressing the origins which created impoverished and exploited communities? Is everyone involved really seeking change or more of the same, until their voices are heard? STALEMATE!