As Original Tuskegee Airmen Fade, an Effort to Save the Legacy Grows | #NeverForget Our History

By Avis Thomas Lester / Urban News Service: More than 16,000 Tuskegee Airmen made history, but now only about 250 remain. They see each other mostly at funerals these days.

When the heroes returned some from overseas after World War II, they were still treated as second-class citizens in the south. They were simply known as participants in the Tuskegee Experience – pilots, engineers, mechanics, instructors and other support personnel enrolled in an Army Air Force program to train black aviators at the Tuskegee Institute in Alabama from 1941 to 1946.

Ten years after the war’s end, they became household names when Capt. Charles E. Francis, a Howard University graduate, published “The Tuskegee Airmen: The Men Who Changed a Nation,” about the unit’s exploits during the war. 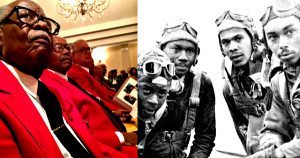 Today, only few now attend the Tuskegee Airmen’s annual conventions, where one of the most popular events is the Lonely Eagles Ceremony, where a bell is tolled and the name recited of each member who has passed since the last convention.

“They are dying off at a pretty rapid rate,” said Byron Morris, 74, of Bowie, Md., a retired civilian U.S. Air Force official who joined the East Coast chapter of Tuskegee Airmen Inc. in 1994. Morris is one of a few new members who are working to ensure the world never forgets their contributions.

“We are always seeking and soliciting new recruits,” said C.D. Smith, 64, of Ashburn, Va., a retired U.S. Air Force colonel and the past president of the East Coast chapter of Tuskegee Airmen Inc. “People think that you have to be a descendant of one of the Airmen or affiliated with the military … but [membership] is open to anyone who would support the goals of the organization.”

Recently, 200 people – including a few “Originals,” as they are called – gathered at Fort Lincoln Cemetery in Washington, D.C., for a memorial service for William E. Broadwater, who died Sept. 22 at age 89 of complications of coronary disease.

Broadwater was among the youngest of the Originals. A native of Bryn Mawr, Pa., he served as a Federal Aviation Administration chief, and graduated as a bomber pilot in the Class of 45E, in August, 1945. By the time his aviator training was over, so was the war.

“The Germans had capitulated the first week of May, 1945 … so Bill missed out on going overseas,” Morris said. “The guys who were older than Bill, the original guys who went overseas, would all be in their 90s now.”

Smith, now a senior defense analyst at the Pentagon, said Broadwater’s was the fourth Airmen funeral he has attended recently.

According to the groups website, Broadwater was the 12th Original to die this year. Twenty-four died in 2014 and 35 in 2013. Including Broadwater, at least 129 Airmen have passed since 2011, the website shows. At least three additional Originals who died this year are not listed.

In March, Leroy A. Battle, of Harwood, Md., a Harlem-born jazz drummer, longtime member of the Washington Redskins Marching Band and a music educator for Prince George’s County, Maryland, schools, died at age 93. he passed on a Saturday night, wearing his Tuskegee Airmen hat while listening to a recording of “Roy Battle and the Altones,” the jazz band he started years ago, according to the Capital Gazette.

Perhaps the most poignant of the 2015 deaths were those of Charles Huntley, Jr. and Joseph Shambrey, who both died on Jan. 5 at age 91 in Los Angeles. They grew up as friends in South Central Los Angeles, enlisted in the military together in 1941, trained at Tuskegee as mechanics, were assigned to the same fighter squadron and were deployed to Italy together. They both returned to Los Angeles, where their friendship continued until their end.

Brewington helps people to document their participation at Tuskegee, such as a West Virginia man who was subsequently given a replica of the Congressional Gold Medal that was presented to the Tuskegee Airmen by President George W. Bush in 2007.

“He died a short time later having proven that he was indeed a member of the Tuskegee Airmen,” Brewington said.

Oliver Carter, 73, of Sterling, Va., a former East Coast chapter president and Air Force veteran, said the Airmen will be remembered for initiating what would become the civil rights movement. Their success led to the desegregation of the military in 1948 and integration of society in general, he said.

He recalled a group of Tuskegee pilots, who, in April 1945, protested against segregated facilities by forcing their way into an officers’ club at Freeman Field in Seymour, Ind., that had been designated for “supervisors,” who were all white, instead of using one designated for the “trainees” – or blacks. The incident came to be known as the Freeman Field Mutiny.

“Ten years before Rosa Parks refused to give up her seat on that bus, those men disobeyed an order in protest,” Carter said. “Some of them were arrested … Technically, they could have been executed. At the time they didn’t know what would happen. But they … were heroes. That should never be forgotten.”