You are not going to believe this, UI Family. I am sure you remember the Pastor who refused to give any tip, let alone the 18% automatically added to a bill of 8 or more to a party. How could you forget this person.

Well, the plot thickens as the waitress who posted the image of the tip refusal by the Pastor was fired. And get this, now that all this attention has been posted and the name of the Pastor has been released, she is expressing regret of over the incident. 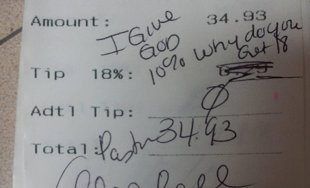 If you are like me, then you are wondering if this regret is because of his refusal to tip the low waged worker who depends on tips or the FACT THAT HE HAS BEEN OUTED  I am going with the latter. What do you say?

Chelsea Welch, the waitress, wrote in an email to Yahoo News that the pastor (who has since been identified as Alois Bell) told Welch’s manager at the St. Louis-area Applebee’s that the ensuing firestorm had “ruined” her reputation.

“I give God 10%,” Bell wrote on the receipt, scratching out the automatic tip and scribbling in an emphatic “0” where the additional tip would be. “Why do you get 18?” (There were more than eight people in Bell’s party, triggering the auto-tip.)

Welch, who snapped a photo of the bill from a fellow server and uploaded to Reddit, defended her right to post the receipt. “I thought the note was insulting, but also comical,” she told Consumerist.com. “And I thought other users would find it entertaining.”

Bell, a pastor at Truth in the World Deliverance Ministries Church, was not amused, and she called Welch’s manager to complain.

“[It was] a lapse in my character and judgment,” Bell told the Smoking Gun, adding she did not expect her easily recognizable signature would be, as her friend informed her, “all over Yahoo. You went viral!”