The uproar against Colin Kaepernick is just insane right now. So, the man took a stance, against a country with opposing values, and many are joining him, he stood up and said what is.

Now, those who swear more by a flag and an anthem than by actual actions are shooting him down. Fact is, they know NOTHING about Colin’s actual actions. This is a man who is working hard to make sure that lives around him are bettered.

And he spends a lot of his time working with kids, especially kids with heart defects.

He puts a lot of work in at Camp Taylor and is their man. According to their website:

Rick and Teresa Kaepernick lost two infant sons to heart disease. Born between their oldest son Kyle and daughter Devon, Lance passed away after two open heart surgeries at 23 days old and Kent died at just 4 days old. Five years after Devon was born the Kaepernicks still felt their family wasn’t yet whole. They then decided to adopt newborn Colin. He was the perfect fit and now completed their family. 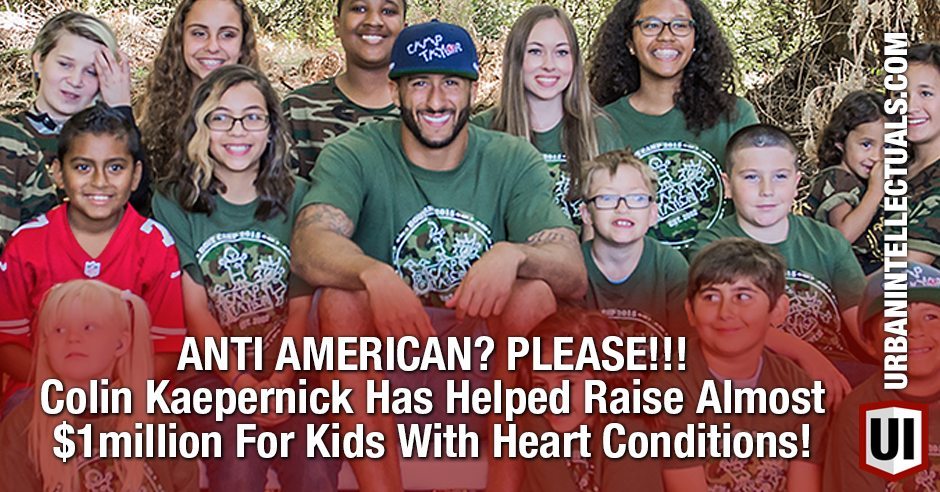 After years of diligent hard work, determination and a will to prove himself, Colin was drafted to the NFL as a quarterback for the San Francisco 49ers. Upon receiving his first NFL paycheck, Colin asked his parents to find a charity that supports children with heart disease to gift a portion of his first check to. Thus, a friendship was born between Camp Taylor and the Kaepernick family and over the past five years the Camp Taylor family & the Kaepernick family have formed a tight friendship and bond. Colin often refers to heart campers as “His Kids” and the kids love him!

Colin’s love for his family and for the kids of Camp Taylor is easy to see upon all faces when Colin is spending time with the children. Rick, Teresa and their children and spouses regularly volunteer at camp programs sharing their talents with the campers. They’ve helped make cardboard boats, officiated pinewood derby races, helped campers during craft time and have participated in many heart education and sibling support sessions. Although the honor of being included in each other’s families is mutual, the Kaepernick family never misses an opportunity to thank Camp Taylor for being a part of the work. They are humble people helping to create extraordinary magic in the lives of hundreds of families each year.

We are forever grateful for the Kaepernick family’s love.

Over the last 3 years they have raised over $900,000 with Colin giving a hell of a lot of time, endoresement and his own money.

So, don’t even begin to call him Anti-Amerrican until you’ve taken a look at your own good for this country.