What is Alpha Phi Alpha?

Alpha Phi Alpha Fraternity Inc. is the first ever black fraternal organization in the United States. Alpha Phi Alpha is an organization committed to mentoring leaders and encouraging a spirit of brotherhood. The organization also focuses on promoting academic excellence. It trains its members to be of service to others and to advocate for the rights of underserved populations.

The formation of Alpha Phi Alpha

On December 4, 1906, seven college underclassmen at Cornell
University in Ithaca, NY came together to form the Alpha Phi Alpha
Fraternity. The fraternity was formed to create and promote a strong
brotherhood bond among African-Americans descendants who found
themselves in the minority in universities across the nation. 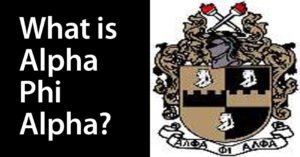 The group is the first Inter-Collegiate Greek-Lettered fraternity to be
established by African-Americans. The members that formed this
organization are collectively referred to as the “Seven Jewels”

Alpha Phi Alpha started off as a social studies club at Cornell University
in 1905. After a short time, the organization would evolve to become a
fraternity. The organization uses the Egyptian Great Sphinx of Giza icon
from as its symbol. It’s motto, “First of All, Servants of All, We Shall
Transcend All,” showcases the strong belief that its members can
transcend anything that comes their way.

Alpha Phi Alpha is a large organization with about 290,000 members. In
1945, the organization decided that it would be all inclusive,
accommodating members from all races. Currently, it has risen to
become one of the largest collegiate fraternities in America.

The organization Alpha Phi Alpha consists of collegiate and alumni
chapters, which are entrusted with the delivery of important programs.
The chapters are required to uphold the spirit of service to all.

The Alpha chapter the first chapter, was founded by members in 1906.
The next one was the first alumni chapter called Alpha Lambda
established in 1911. The naming of these chapters adheres to the order
of the Greek Alphabet. There are 730 active chapters in Asia, the
Caribbean, Europe, Africa and the Americas.

Alpha Phi Alpha provided great support during the Civil Rights era, the
World Wars, and the Great Depression. The organization is keen on
addressing social issues including urban housing, apartheid, and cultural
and political issues affecting people of color.

Although joining this organization can be life-changing, at times it gets
difficult for some college students to join. This is because some of them
can’t afford to pay the dues required to join the fraternity.

Alpha Phi Alpha has become the formidable organization it is now
because the founders laid the foundation on the right principles. The
founders decided the organization would be dedicated to uplifting
humanity. To them, the best ways to achieve this objective would lie in
promoting good character, fellowship and scholarship.

• Martin Luther King Jr – An outstanding civil rights leader known for his memorable speech “I Have A Dream”.

• William E. B. Du Bois – An African-American writer, author, scholar, editor, and Pan-Africanist. He advocated for Black Reconstruction in America.

• Nathaniel Allison Murray – One of the founders of Alpha Phi Alpha and an educator in the District of Columbia Public Schools.