What is Alpha Kappa Alpha?

Fraternities and sororities are a big part of the American college experience and this certainly the case for African-Americans. Dating back centuries, these Greek-lettered organizations were created to serve the purpose of being a social society for college students and later became known as education promoting and service organizations. Alpha Kappa Alpha Sorority Inc. is one of the most noteworthy African-American sororities ever established in the United States. 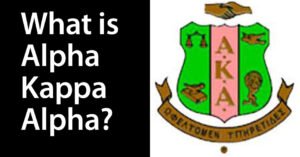 Alpha Kappa Alpha has the recognition of being the first African-American sorority in history. It was founded on January 15, 1908, by a group of sixteen college women, headed by Ethel Hedgeman Lyle. It was established on the grounds of Howard University, a historically black university located in Washington D.C. Alpha Kappa Alpha was formed on five simple principles:

Over and above this, Alpha Kappa Alpha was created with the goal of overcoming the obstacles that African-Americans had to endure during that century. Over the years, the sorority expanded and incorporated broader new initiatives.

The impact of Alpha Kappa Alpha grew and remains large to this day. This is a result of the 1024 chapters of Alpha Kappa Alpha has established both nationally and internationally that carry out the work of the organization. These chapters include undergraduate and graduate members. With the mission of improving the socioeconomic status of minorities, Alpha Kappa Alpha continues to invest actively in the community. The list of community outreach programs formed by the sorority is endless.

A few charities and associations past and present created by Alpha Kappa Alpha include:

The power and influence that Alpha Kappa Alpha possesses are shown by the large volume of people who partook in its year-long commemoration of its 100th birthday. Various events that occurred during this joyous occasion was the setting of a Guinness World Record and the recognition by U.S. Senator Hillary Clinton and a sorority sister, U.S. Representative Sheila Jackson-Lee. They both affirmed that they will implement legislation surrounding the sorority’s founding. Furthermore, those who failed to attend the celebration opted to hold celebratory events in their hometowns. Even Mattel designed a Barbie doll dressed in an apple green and salmon pink gown.

Alpha Kappa Alpha has developed into a powerful sorority with strong African-American roots and continues to be a model of black excellence.