This is the sort of news we love to report and is much needed in our community. With all the negativity happening to our people around the country and world, it is good to know there are some bright spots of opportunity and advancement.

Tony Elumelu is one of Africa’s richest businessmen, an economist by training and visionary philanthropist. He is the Chairman of Heirs Holdings, the United Bank of Africa, and Transcorp and founder of the Toney Elumelu Foundation. 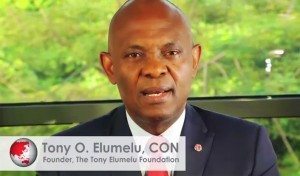 Last year, Elumelu helped organize a three day summit in Washington DC with 50 African heads of state and hundreds of business leaders from America and Africa. The goal was to strengthen the economic bond and opportunity for all involved.

Speaking to the Wall Street Journal, Elumelu spoke of the summit and said, “An opportunity to move beyond the usual conversations on aid and instead explore new opportunities to collaborate and co-invest in initiatives that generate value on both sides of the Atlantic.”

Elumelu also spoke with Black Enterprise on his vision for a real partnership between the United States and Africa, not just a relationship of providing aid, but trade as equal partners, engaging investors and the need for consistent electricity.

“We should welcome the fact that the journey has finally begun. I like the nature of the imagined engagement between Africa and America. President Obama’s visit to Africa last year was the starting point,” Elumelu says. “The fact that they have realized the need to engage with Africa at the scale and magnitude that they are going about it now is welcome.”

His foundation is also playing its part in reaching out to minority and women-owned businesses. “The Tony Elumelu Foundation will launch an entrepreneurship program with 100 million dollars that will touch 10,000 entrepreneurs across Africa and the United States,” he says. “We will train and mentor them and create platforms for them to have commercial business engagements.”

SOUND OFF: What do you think of Elumelu’s $100 Million Dollar entrepreneurial push?