Ok, I am no mathematical genius, far from it, but I can do my simple sums. So, if Africa produces 75% of the world’s cocoa then surely this great continent should be flowing with the riches, with somewhere around 75% of the revenue of the chocolate industry worth around $100 billion…. Oh but wait, this is Africa, which has constantly bee pillaged and screwed over. So somehow it only comes out with 2%…

Seriously it just ain’t right and I guess it’s no real surprise.

Cocoa, coffee, rare minerals / metals, the world runs on the produce of Africa. Yet on the ground people starve, live on assistance from rich nations, endure war and corruption and worse off, African’s hardly even use any of the things they produce. Give an average cocoa farmer a piece of chocolate and they will probably not like it. Some reports suggest that many farmers don’t even know what the cocoa is used to produce, just some stuff the white man eats. 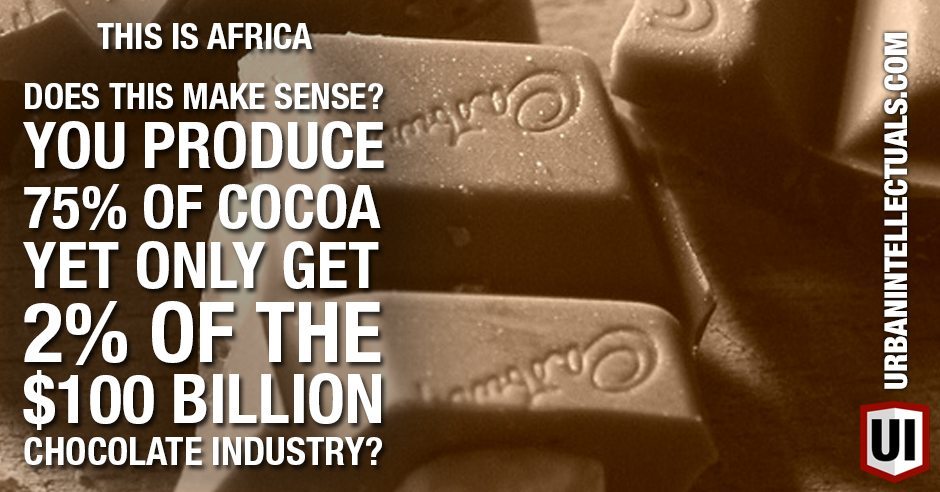 “The formula for the wealth of nations is clear: rich nations add value to exports, poor nations export raw materials,” he said.

Citing the cocoa sector as an example, he said while Africa accounts for 75 per cent of the global production of cocoa, the continent reaps only 2 per cent of the $100 billion annual market for chocolate.

“This model can no longer create the desired wealth for Africa. Africa must no longer be stuck at the bottom of the value chains. Africa must now rapidly diversify its export mix and add value to all of its raw materials by developing efficient and competitive value chains. This is especially critical, as Africa only accounts for 1.9 per cent of global value added in manufacturing, and this has not changed for decades. It is now time to industrialize Africa,” he said.