Of course it was no accident that Brad Paisley’s well-intentioned, but predictably inflammatory new single, “Accidental Racist,” began making the rounds on the Internet on the Monday before his ninth album,Wheelhouse, was to be released today. 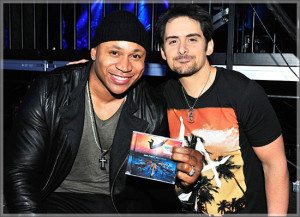 Of course a direct trajectory could be traced between LL Cool J’s unlikely presence at the American Academy of Country Music Awards on Sunday night and the public unveiling of his guest rap verse on “Accidental Racist” the following day.

Of course the explosion of baffled and/or outraged emails, tweets and Facebook posts that detonated in the wake of “Accidental Racist” and its ill-conceived message of healing for an America incurably divided by a history of systemic disregard for human rights was perfectly timed to sustain itself through the night and further foment far more interest (prurient or otherwise) than would otherwise have been due Wheelhouse.

Despite whatever calculated, media-manipulating machinations that might have guided its release, however, “Accidental Racist” looked by Monday’s end to have bitten its creators firmly in the behind. The online response to Paisley and LL Cool J’s misbegotten update on the “Ebony and Ivory” theme — a track that begins with a waffling non-apology to Paisley’s Starbucks server for any misunderstanding that might arise from him wearing a Lynyrd Skynyrd T-shirt emblazoned with the Confederate flag because “Our generation didn’t start this nation/And we’re still paying for mistakes/That a bunch of folks made long before we came/And (are) caught between Southern pride and Southern blame” and ends with LL Cool J observing that “the Mason/Dixon needs some fixin’” — was swift, animated and mostly merciless. For a time on Monday afternoon and well into the evening, it was a full-time job staying on top of the Twitter drolleries being heaped unforgivingly upon the pair’s efforts at mending ways for all the nastiness that preceded … er … the American Civil Rights movement.

By midnight, the widespread, unsolicited derision had apparently taken its toll; pretty much all of the readily searchable links to the YouTube video for “Accidental Racist” that originally circulated — basically an audio clip of the tune that superimposed its lyrics (“When I put on that T-shirt / The only thing I meant to say is I’m a Skynyrd fan”) over a montage of photographic stills — were met with a message that the material in question had been “removed by the user.”

Meantime, Entertainment Weekly was so moved by the “ruckus” over “Accidental Racist” that, it claimed, it was graciously releasing a defence of the song presciently banked during Paisley’s visit to the EW office “a few weeks ago” a day ahead of its originally scheduled Tuesday publishing date.

“This isn’t a stunt,” the magazine quoted Paisley as saying whilst preemptively holding forth on the subject of “Accidental Racist.”

“This isn’t something that I just came up with just to be sort of shocking or anything like that. I knew it would be, but I’m sort of doing it in spite of that, really.

“I’m doing it because it just feels more relevant than it even did a few years ago. I think that we’re going through an adolescence in America when it comes to race. You know, it’s like we’re almost grown up. You have these little moments as a country where it’s like, ‘Wow things are getting better.’ And then you have one where it’s like, ‘Wow, no they’re not.’”

Regardless of its authors’ altruistic motivations, “Accidental Racist” was the motivation for a heroic amount of off-the-cuff comedy online on Monday — even the normally reserved folks at Billboard posted a compendium of “LL Cool J’s craziest lyrics” from the one track — and particularly on Twitter. A sampling of the finest entries: