Abolitionism and the Underground Railroad-1831

Slavery in the United States was characterized by the grave mistreatment of African Americans. However, the first half of the 19th century came with an awakening where many people in northern states began opposing slavery aka abolitionists. These societies went against White Southerners who were benefiting from the slavery system. This movement later became known as the “Abolition movement”.

The “underground railroad” wasn’t a formal railway as the name might suggest. On the contrary, it was a secret system that aided enslaved people flee to freedom. The Underground Railroad comprised of allies and abolitionist sympathizers willing to offer refuge, safe passage, and support to enslaved people as they sought freedom. The underground railroad included several meeting points, safe houses, transportation hubs and numerous secret routes. The enslaved who managed to get away found refuge in many northern states and Canada. 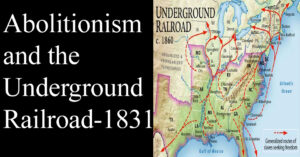 The Significance of Abolitionism and the Underground Railroad

The Underground Railroad facilitated the movement of the enslaved towards the Northern Free states and Canada. On their way, the fugitives received support including food, water, and other provisions offered by the abolitionists.

American abolitionist and political activist Harriet Tubman was a conductor on the Underground Railroad. The term “conductor” referred to persons that assisted the enslaved flee to freedom. At that time, Tubman organized thirteen missions in which she helped about seventy people escape to freedom.

The Underground Railroad was a catalyst that eventually led to the participation of blacks in the American civil war. Tubman and other heroes joined the union army where they contributed immeasurably to the war. For instance, Tubman served as a nurse in the army where she took care of wounded soldiers. In addition, Tubman was a military scout and a spy who helped the union army in its organization.

The Underground Railroad manifested the true feelings and the stand of antislavery sympathizers who helped blacks walk to freedom. These persons, mostly situated in the North helped over one hundred thousand enslaved release themselves from bondage.

The role and the significance of the Underground Railroad in ending slavery in the United States continues to be celebrated to date. During his term as President, Barack Obama made reference to Harriet Tubman often as a leader and change agent.

President Obama launched the Smithsonian National Museum of African American History and Culture (NMAAHC) when he spoke about the achievements of Tubman. The president said that he would have been delighted if his daughters had the privilege to see Tubman and other African American heroes. According to him, Tubman would have taught them that it was possible for ordinary Americans to stand and do extraordinary things. The inauguration took place during the Black History month, a time when Americans remember the various freedom movements in the US. The Underground Railroad is one of the most effective and fruitful protests against slavery in the U.S history.