8 Slam Poets You Need to Know About

Poetry is an art form that can be used to express people’s opinions on topics, a means of connecting on an emotional level, and a tool to bring communicate societal issues just to name a few. This art form has many variations that have been developed over time. One specific artform is slam poetry. Slam is known as one of the most vital and energetic poetry movements, paying homage to poetry as an oral tradition from the Beat and Negritude poets who were devoted to the spoken word. Slam Poetry often draws its inspiration from politics, race, economics, and gender injustices, alongside current events. Knowing that history, here are 8 Slam Poets you need to know about: Get into their artistry. 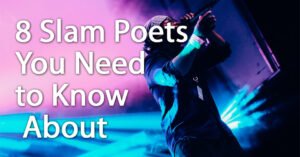 Danez Smith is a young black man who faced many struggles in his youth. As a gay African-American, he uses his poetry to highlight the battles these demographics fight daily. Smith is blunt and to the point, but his poems are interspersed with humor and sass. He uses slam poetry, to address difficult issues pertaining to body politics, queer rights and racism in America. Smith also tends to deliver messages in a hip-hop style which elevates his poetry into a musical domain.

Desmond Spann aka D Lux the Light is passionate about expressing himself through poems, raps and songs. Not only does he use his talents to win many poetry slam competitions, but he also shares his musical intelligence offstage as an educator in the David Douglas school district. He also serves on slam poetry committees and judge panels.

As a performance poet and activist, Taylor’s work is encapsulated in honesty and vulnerability and at the same time, her work is full of confidence and empowerment. Her poetry is rich with emotion and uplifts her audiences when she preaches about self- love regarding body image. This is an important societal issue that people face, and Sonya uses her art to shine a spotlight on it.

There are truly no words to describe the type of artist this poetic genius is. Her work is raw, she doesn’t hold back, and is a truth-teller. She doesn’t shy away from the difficult issues and she openly conveys thoughts and opinions on these subjects through her beautiful writing. She has had pieces appearing in XXL as well as The Source. She also mentors other poets and provides workshops for youth.

Dominique Christina is a spectacular poet among other things who has won multiple slam competitions. Her work is greatly influenced by her family’s legacy in the Civil Rights Movement which has led her to write various projects on black culture. Christina is also an educator and activist which enriches her platform.

The 5th L is a Baltimore-based but nationally traveled spoken-word poetry group which is made up of David Ross or Native Son and Femi The Dri Fish. They are a very lively spoken word team that delivers spoken word performances with the skilled theatrics of a Broadway show, the high energy of a rap artist, the duo maintains exceptional poetic integrity that entertains and enlightens their audiences.

Tonya Ingram is an individual who knows how to capture the audience’s attention. She uses her abilities through slam poetry to talk about hardships of growing up as a young black woman. Her poem, ‘Unsolicited Advice’ helped her university, NYU, to win back-to-back competitions at the College Unions Poetry Slam Invitational. In addition to the many awards she has won, she also got a book deal that will compile her best works to date.

Harris received wide-scale attention for the emotionally laden poem ‘That Girl’ which was featured on HBO’s ‘Brave New Voices’. From the recognition she has received for her work, she has found her way into the hearts of many and has become a member of ‘The Strivers Row’ an important spoken word collective.

The art of poetry is a worldwide phenomenon that is used to convey thoughts pertaining to a plethora of everyday issues. Slam poetry to be specific, helps the black community to speak its minds about the hardships of race, religion, human rights, and much more. These eight poets are just a small group of countless others that use their voice to highlight and tackle those issues.