On Feb. 1, 1960, Ezell A. Blair Jr., Franklin E. McCain, Joseph A. McNeil, and David L. Richmond staged a sit-in at a Woolworth’s lunch counter, in Greensboro, N.C. The four African-American college students, later known as the Greensboro Four, attempted to order coffee at the “whites only” lunch counter but were refused service. 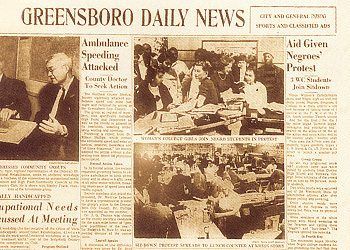 They continued to return to the store and stage peaceful sit-ins to protest segregation, and soon they were joined by hundreds of other Black colleges students. The initial Greensboro protests eventually spurred sit-ins of stores with segregated lunch counters in other Southern cities. In reaction to public support of the sit-ins, the entire Woolworth’s chain finally moved to desegregate it in July 1960.

Also on this day in 1902 author, activist and poet Langston Hughes, who was one of the best-known talents during the Harlem Renaissance in the 1920s, was born in Joplin, Mo.