16 Year Old Creates Plugin That Exposes Who Owns Your Politicans

The American political experiment is chaotic to say the least, bought and sold to say a bit more. The sad thing is you can’t find many people that wouldn’t disagree with this assessment, but it has always been difficult to find out who is doing the buying….until now.

Leave it to the youth, but a 16 year old boy, who can’t even vote yet, has created a simple and easy plugin to solve the problem of finding out who is buying and selling your politicians. His name is Nicholas Rubin and he is the one providing a layer of transparency for voters.

The browser plugin is called Greenhouse.

After installing the plugin on Chrome, Safari, or Firefox, Greenhouse will highlight the names of any members of Congress no matter what webpage you’re on. When you hover your mouse of the highlighted name, a list pops up showing the elected official, their political affiliation and state, and a full list of their biggest contributors, as well as dollar amounts. The pop-up also shows what percentage of the official’s donations were $200 or less, and which campaign finance measures they supported.

The data Greenhouse uses is pulled from OpenSecrets.org, and includes dollar figures from each politician’s most recent election cycle.

I got the plugin for the Chrome browser. After downloading and browsing a few political websites, noticed this red line under a politician’s name. Hovering over the name and boom, the numbers on the industries and lobbies are purchasing, I mean investing, in the politician appears like below. 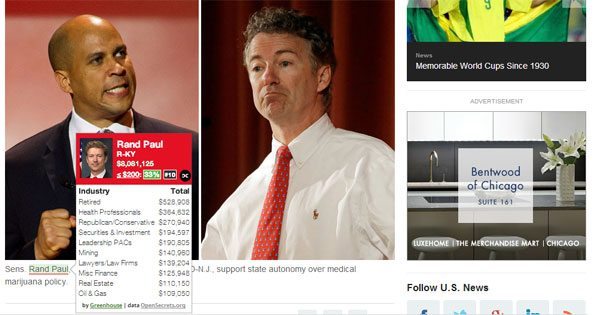 Hats off to this young man for bring another layer of political transparency to the American people. My fear is that despite the ease of use and valuable information given, the American people will still not take advantage of this plugin that shows just who is buying and selling your politicians.

We use information collected through cookies and similar technologies to improve your experience on our site, analyze how you use it, and for marketing purposes.
16 Year Old Creates Plugin That Exposes Who Owns Your Politicans