Granted. No one should be breaking into anyone’s home or shooting and killing dogs, but 23 years in prison seems a bit excessive. However, this is the sentence for the crimes committed by a young black male in the state of Florida recently. In the wake of police killing of unarmed, teen Michael Brown where the officer has yet to be charged and the release of George Zimmerman in the killing of Trayvon Martin, many people are puzzled by this.

At the age of 16, Ivins Rosier broke into a home owned by Florida Highway Patrol Trooper Robert Boody in West Palm Beach, Florida. He shot and killed a 5 year old German Shephered, who was a retired police dog. The detective and prosecutor on the case argued the death of the dog was equivalent to the “murder of a law enforcement officer”, which seems not to be legally true. 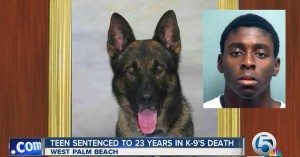 “I believe this to be sadistic to do this to a child,” said Rosier’s attorney, who plans to appeal. He conceded that Rosier’s crimes were serious, “but when you look at the range of punishments available, that’s why they call it juvenile.”

Charged as an adult, Rosier was convicted on three felony counts: cruelty to animals with a firearm, burglary of a dwelling with a firearm, and shooting into a building. This resulted in the sentencing of 23 years in prison.

“A gun in a 16-year-old’s hand can do equally the damage as a gun in an adult’s hand,” said the prosecuting attorney.”He’s not a child.”

Boody, the trooper and dog owner, cried during his testimony on the stand when discussing how he came home and saw his dog dead by gun shot wounds.

Our hearts go out to Boody for the lost of his pet. Having a beloved animal taking from you is no small matter at all. However, this young child who obviously shouldn’t have done what he did is having his chance at redemption taken from him with the sentencing.

It is hard for the black community not to feel the lives of animals are more valuable in the eyes of America then our children when cases like this, the police shooting of Michael Brown, John Crawford, the killing of Eric Gardner, and many more are constant reminders of this fact.