They say necessity is the mother of invention and this is sure the case when it comes to 13 and 15 year old, Nigerian brothers Anesi and Osine Ikhianosime. Their necessity is their need for a faster mobile web browsing experience…because who wants to wait a few extra seconds for Google Chrome to load when you can build a better browser?

The dynamic coding duo are your ordinary African teenagers. They attend school in Greensprings school, Anthony Campus, Lagos. They love their friends, soccer, to have fun and coding, obviously. 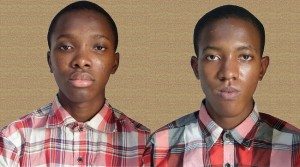 The young problem solvers got tired of waiting for Google Chrome to load on their mobile phones, so decided to do something about it instead of complain. They decided to build a better mobile browser last year and called it Crocodile Browser Lite. It is currently live and ready for your download in the Google Play store right now.

Raised by parents who believe education and technology is very important to the lives of all, they were raised with high aspirations in mind. Their mother says they were able to use the computer before they know how to read and have always been fascinated with technology, creating, building and solving problems.

By the age of 7 & 9, the duo knew they wanted to start their own technology company. Inspired by Microsoft Windows platform,

By the age of 7 & 9, the duo knew they wanted to start their own technology company. Inspired by Microsoft Windows platform, they decided to name their company “Doors”. However, later they discovered that the name was taken, so they changed it to Blu Doors”, which is still the current name of the company.

At the ages of 12 and 14, they decided to take on the task of learning how to code. They taught themselves, but had much encouragement, inspiration and access to computers from their school. They did take advantage of free resources. “I learnt to code by myself. I startede in 2013, I used sites  like Code Academy, Code Avenger and books like ‘Android for Game Development’ and ‘Games for Dummies,” said Anesi.

The plan to create a better browser for low end featured phones is one that is needed for the developing world. While Chrome and other browsers work great on high end smart phones, the majority of the world are not using this technology and need a low-end option that still provides quick browers response, so this is what the young men did. They built a better mouse trap for the phones they were using.

Crocodile Browser Lite 3.0 will be available this year in the Google Play store and something you should check out to give the young people support. They currently have over 500 downloads of their browser, but hoping to see it grow in the near future.

Their future plans are to attend MIT in the United States because they feel the educational opportunities, resources and access to technology are exactly what they need to positively impact the future as then intend.

Hats off to these young men and their family!